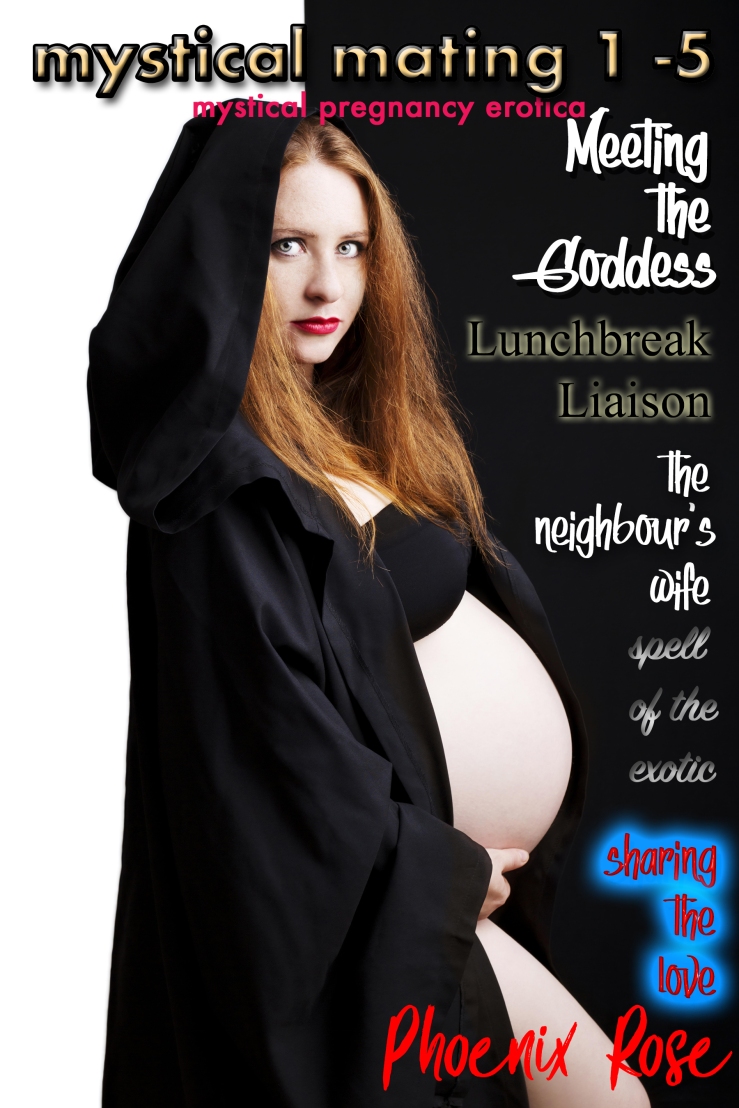 The first five tales in the Mystical Mating series have been bundled together in a neat little package for your convenience (and a saving for your wallet!) You can find it here.

The series follows on from my previous series fertile fantasies, this time from Ivy’s husband Eric’s perspective.

A year after the events from Ivy’s adventures whilst under a powerful fertility curse, Eric is out to buy his wife a present she’ll never forget. In a strange twist of fate, Eric’s present lands him in a predicament similar to his wife’s did-an uncontrollable urge to breed with any fertile females who are within close proximity. Fortunately the curse comes with a few beneficial side-effects, namely that of Eric’s new ‘enhanced’ size and potency…

I loved writing this series (apologies again for the delay between part four and five)  as it was a chance to revisit some of the characters I’ve created and explore them from a different angle. Writing some of the scenes was a lot of fun, imagining which bodies would end up where, who would do what to whom and I hope that comes across in the story.

Here’s a breakdown of what’s included in each part so you can decide if the story might be to your liking. It’s also free with Kindle Unlimited and check out the ‘look inside’ feature-I try to get some

Eric is looking for a special gift to surprise his wife when he stumbles upon a strange item of jewellery at what appears to be a magic shop. The item is too small for a wrist but too big for a finger. The assistant informs him it’s not meant for either…

Upon donning the artefact Eric is consumed with a strange urge. He is visited by the Goddess Aine who uses him for her own needs and places him under a strange curse.

Eric forces himself to go into work for a normal day at the office. The train journey in is difficult enough but when his co-worker Lynda is more fertile than ever his need becomes harder to control. Will she respond to his advances or is he going to end up with a visit from the HR department?

Eric seeks out the help of a friend, Julie. Unknown to Eric is that Julie is not only ovulating, but desperate to have a baby of her own. Will she remain a friend with wise advice or will they both succumb to their urges and take advantage of their partners absences?

Part 4 – Spell Of The Exotic

Eric returns to the shop to confront the woman who sold him the cursed artefact. Hopefully she can break the curse or at least summon Aine. Will she have any answers or does she have other plans for Eric? What will happen when Aine does appear? What would happen if his curse’s effects were magnified?

Eric worryingly waits for his wife’s return whilst staying indoors to avoid any further temptations. Will she hear him out and believe his explanation he was cursed? Will she be willing to share his gifts with her friend Julie or Lynda from his workplace?

This is the last series I’m going to write for the time being. Mainly because it takes so much work in terms of time and editing and also because I’ve got so many ideas I want to write down and share with you all! So my next story is going to be a stand alone short in a similar vein but with a different twist on things. Stay tuned!

Thanks for all your continued support!

…The moment she walked through the door I knew I was in trouble. There was no way I could lie to her about what I’d been up to whilst she was away, but there was another, more pressing matter which complicated everything-she was so fertile I could taste it.
As she bent over to put her bags down, along with the view of her beautiful, curvy thighs, a rush of her scent washed over me and lit up every dark urge to breed within me…