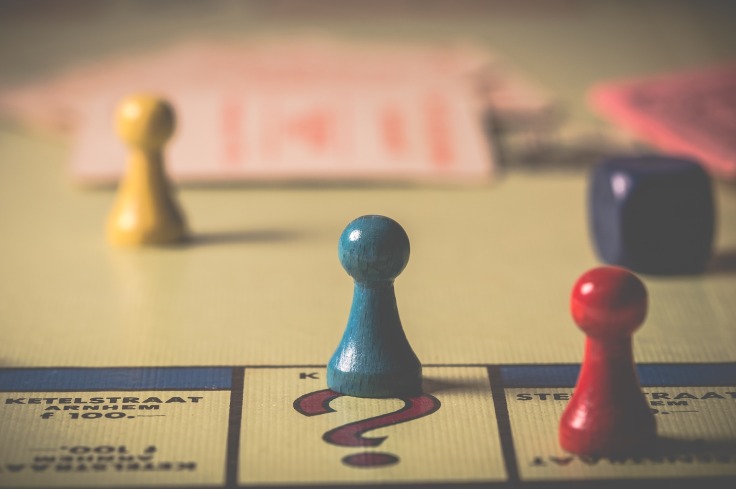 Monogamy is, what appears to be, one of those cheesy board game ideas for couples which would result in more embarrassment and laughter than any sexy times. At least, that’s what I thought. I’m so glad I was wrong.

After you’ve been with a partner a long enough time you’ll probably own nearly every sex toy you could ever need. And then some. And some free ones which get sent with the ones you actually ordered. So what are you going to do when you’re browsing a site like Lovehoney or Bondara and you’re stuck for ideas?

That’s how I found myself ordering Monogamy. It was in the couples section and it had gained many favourable reviews. I think there was also some sort of discount running at the time or a free toy so I took a gamble. (side note-I am not being paid by anyone for this review, I’ve included the links for ease of purchase or browsing).

After it arrived my partner was very skeptical, eyeing it up and thinking a super cringe-worthy time was going to be had by all. I was tending to lean towards her opinion but late one Saturday evening we got everything out-plus some ‘props’ as recommended by the helpful reviewers of the product. A few drinks were poured and we sat down to play.
What ensued in the next couple of hours was a really fun time where we:
1. learned a few extra pieces of information about each others past experiences and unspoken fantasies,
2. kissed like teenagers without leading to anything extra,
3. I drank way more than I should have with the extra shot challenges on certain squares and subsequently ended up with a day long hangover the next day and
4. watched porn together in a state of complete play and fun with my partners insecurities not present (or maybe she was withholding? I couldn’t tell though).
It was a real revelation that we could have such a ‘fun’ time through such prescribed means but that’s what it was-fun. I’m normally the type to hate anything described as ‘fun’, ‘zany’, ‘madcap’ or such but it really was.

The other thing which was nice was the idea of spending the whole evening devoted to each other with just some nice music on in the background, no TV or any other distractions.

It’s normal to settle into some kind of routine with your other half after a significant period of time but it was definitely refreshing to be in each other’s company in such a way. Not watching TV together (which can be nice, too!) or relying on any other external source of entertainment aside from the actual game. It meant we made the entertainment, we were the entertainment.

If you’ve pushed the boundaries quite a bit with your other half a lot of this game is fairly tame but you can change a couple of things to suit your own tastes. For instance, after the drinking fiasco, I created ‘truth or dare’ cards to replace the take a drink squares. Neither of us are particular heavy drinkers these days and it seemed natural to change that element-especially as we’re both quite comfortable talking and exploring most things whilst completely sober. For other couples who want some ‘dutch courage’ it will work great. And that’s the beauty of the game, it’s customisability.

Remember that it’s your game so, unlike the serious arguments which can arise when playing Monopoly or Scrabble with family members, the adherence to rules is arbitrary. As is the need to complete the game.

I love the tease, build up and anticipation element of sex so this game plays to that well. Each time you go around the board the questions and tasks get hotter and heavier until you’re ready to tear each other’s clothes off by the end. A couple of times we’ve not made it to the end, abandoning the game for some bedroom (or on the couch) sexy times mid way through play.It can end up being quite a long game if you play the full version (the instructions provide ideas and options to shorten play) and if you were already horny and amped up before starting you might not make it to the ‘finish’.

One memorable time my wife ended up with a task to tie me up which she duly did, handcuffing my hands above my head and pulling my t-shirt over my eyes to prevent me watching her. That was the first time I’d been tied up and enjoyed it. There’s no doubt this helped me discover my ‘inner submissive’ as any other requests to tie me up until then were refused based on past experiences. As part of the game though, I had to participate. And I’m so glad I did.

The game finished there that time, in a glorious explosion from myself all over my chest under the incredible hand job teasing technique my better half possesses.
The time watching pornography together also led to an open, honest discussion regarding her reasons for not enjoying it afterwards and I believe it made our relationship stronger for it.

I would recommend having a browse of the reviews on Lovehoney (there’s 247 at the time of writing this) as they’re very varied and honest. I can tell you I doubt you’ll regret buying this game.

If you’re a new couple it’ll give you a chance to explore or play under the pretense or guise of the games rules and if you’re an established couple you’ll have a nice ‘rekindling’ experience. Additionally, as some of the reviewers point out, I don’t think this game would need to many changes or adaptations to work for a same-sex couple or (possibly) even poly amorous types as long as everyone participates in the tasks or chooses just one other willing participant. I imagine that could lead to even more fun…If you’ve tried the game, please comment below. I’d love to hear others experiences and ideas.

I would like to admit it’s not something we play often. And a lot of times it takes a bit of courage on my partner’s side to agree to a game due to the stripping element (she feels a little self-conscious sitting half naked just for my viewing pleasure without any action taking place-perfectly understandable.) But, like the extra large dildos or sexy lingerie we own which also sits at the bottom of an untidy cupboard, I’d hate to throw any of it away or lose it. They’re all just waiting for a special occasion. The right moment for us to use them to make another sexy memory which we’ll take to our old age.